Washington is broken.  The two party system is corrupt and broken — corrupted by special interests. Our country, our liberty, and our Constitution — and Texas itself — are under attack, and we will lose it all if we don’t act, quickly and effectively.

Most problems we face are caused by the federal government exceeding its constitutional limits.  This would not surprise our founders — they knew that federal overreach was not a matter of “if” but “when.” 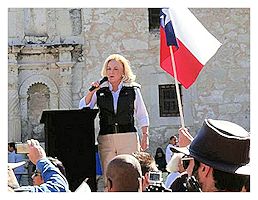 We live in a surveillance state that could easily become a police state.  To resist this tyranny, we have to chart a new course — away from Washington and outside the two party system.  The time will come when the federal government is not just broken but totally collapsed and without a functioning currency.  When that day comes, Texas will be forced to do without many things we have come to rely on from the federal government – like almost 40% of our state budget.  Texas will have no recourse but to stand on our own two feet, as we should have done all along.

To survive this looming crisis,  Texas must have a governor with the vision to see the coming storm, a plan to defeat it, and the guts to see it through.  We must have a Plan for Texas Independence (of course, we are not talking about secession but demanding that our Constitution be enforced, not terminated).  Only Kathie Glass has the vision, plan, and guts.

To restore our lost sovereignty, this plan must include:

★ Fiscal sanity: To be financially independent of Washington, replace — or even better do without — the almost 40% of our budget that comes from the federal government.  Promote and restore sound money to fall back on in the event of a currency collapse.  Send the Texas Rangers to bring our Texas gold back from New York.  Slash our budget 50% — taxes and spending — which would just put Texas back where we were when Rick Perry first took office.  End property taxes and franchise taxes, and resist efforts to impose an income tax.  Opt out of Medicaid.  No taxpayer-funded services for non-citizens.

★ A welcoming immigration policy and a secure border: As in times past, create a made-for-Texas guest worker program which prohibits receipt of taxpayer-funded services.  Use our Texas State Guard, which is under the total control of the governor, to work with Texas law enforcement and protect private property rights along the border.

★ Texas sovereignty: Revitalize our Texas State Guard to secure our border, provide disaster relief, and anything else a state militia should be prepared to do in these times.  Protect our Texas electrical grid from interference and harm, and protect our civil liberties by forbidding its use by the NSA’s San Antonio super-spy center.

By uniting around this Plan for Texas Independence, Texans can do again what we have done before: face down a federal tyrant, and change the course of history!