Kathie Glass was born in Buford, Georgia. Her father worked for General Motors as an assembly line worker, and her mother was a school secretary.  As the first person in her family to go to college, Kathie worked her way through college and law school. 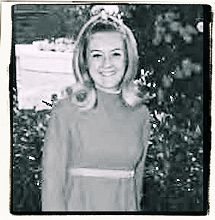 On 7/7/77, Kathie came to Texas, and she has been a proud Texan ever since. She met Tom Glass, an Aggie and Odessa native, at a Texas Libertarian Party conference in 1981.  They had their first date at a national convention in Denver. Tom and Kathie married and then raised their two children in Houston. Their daughter is a Rice graduate and attorney.  Like his father, their son graduated from Texas A&M with a chemical engineering degree, and works in Houston.  Tom and Kathie have a small ranch in central Texas.

In 1982, Kathie was the Libertarian Party’s first attorney general nominee on the ballot, receiving over two per cent of the vote. Her performance in the debates received rave review and unprecedented attention for the Party. You can see the video of this debate on Kathie's You Tube channel.

Kathie was the Libertarian nominee for governor in 2010.  She ran an active, statewide campaign, getting over two per cent the vote and gaining the Party ballot access for four years. Once again, she excelled in the debates. As the AP said, “Kathie Glass seemed to steal the show.”

In her 2014 gubernatorial campaign, Kathie traveled 40,000 miles to all 254 counties in Texas in her tour bus. 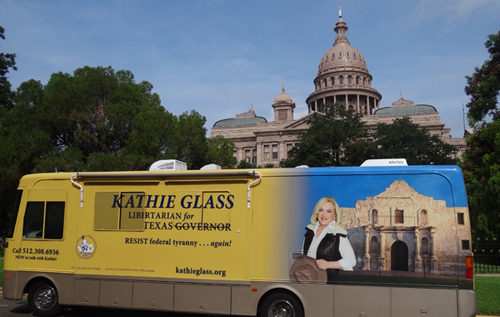 She visited over 250 newspaper offices and was reported on in every major media center.

In 2014, the Campaign raised and spent over $250,000.  It gave out over 35,000 brochures; 3,500 yard signs; and who knows how many bumper stickers, buttons, T-shirts, and stickers.  The Campaign created 14 professional videos which aired on commercial television and the internet, and multiple radio ads that ran in dozens of markets.

Kathie practiced as a highly successful civil trial lawyer in Houston for over 30 years, trying many cases and never losing a jury trial.  She worked in large, medium, and small law firms, including her own firm in which she employed as many as 20 employees.  Tom was a systems analyst for a major oil company before he retired to manage Kathie’s 2014 campaign.

Kathie wants to be Texas governor to unite Texans to fight two threats to our liberty: an out of control federal government, and cronyism here in Texas. Dedicated to Texas, America, liberty, and the Constitution, Kathie believes all those are under attack by an increasingly tyrannical federal government, and the only entity powerful enough to enforce the Constitution and resist federal tyranny is TEXAS.

Kathie wants to be the 49th governor of Texas — and its first Libertarian governor — to lead the fight for our liberty and Texas sovereignty under our Texas and federal constitutions.