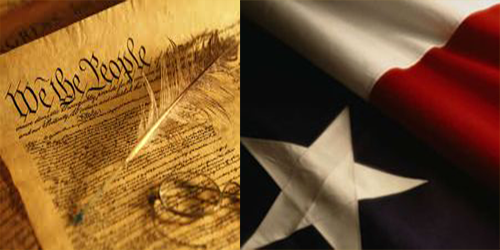 Our nation is dying because the federal government goes beyond the bounds of the Constitution every day, and no one is stopping them.  The federal government spies on our emails and phone calls without warrant, gropes us at the airports without warrant, forces us to buy private health insurance, destroys our prosperity with unconstitutional regulatory agencies like the EPA and OSHA, and tries to grab our land and guns.  The feds will never limit themselves.  Suing allows the very tyrants we are fighting to decide our fate, and we get massacred.

To save our liberty, our Constitution, and our country, we must honor our oaths and enforce the Constitution.  If a federal agent is engaging in an unconstitutional act, it likely also violates Texas law.  Kathie Glass says, “Don’t sue the buzzards, arrest them!”

The Texas governor CAN enforce the Constitution.  Only Kathie Glass will.

Each individual who has sworn an oath to defend, preserve, and protect the Constitution against all enemies, foreign and domestic, has an obligation to interpret the Constitution to the best of his or her ability.  Constitutional interpretation, therefore, is not just a matter for courts and judges.  Tellingly, the Constitution itself is silent on WHO DECIDES if a law is constitutional or not, as is proper inasmuch that it is every person’s duty to make this determination.

The Constitution is not a self-executing document.  Someone has to enforce it.  All branches of the federal government have been failing to limit their own power for over a century.  And state officeholders have abdicated their responsibility to exercise independent judgment and take action to stop the violations.

While every government official has the duty to protect the Constitution, the governor of Texas is the position that can best lead Texas to resist unconstitutional federal acts.  Lawsuits won’t work.  We only win a few, and the feds ignore the ones we win.  A convention of the states to modify the existing Constitution won’t work.  If the feds are ignoring and violating the perfectly good Constitution we have, why would they bother to follow any new provisions?

Ultimately, enforcement of the Constitution by the state of Texas – also called nullification and interposition – is our only hope at restoring our liberty and Constitutional balance.  The beauty of this approach is that it only needs Texas voters to work.  We don’t have to rely on California or New York voters.  And in a competitive three way race, we only need a bit over one third of those Texans who vote to elect Kathie Glass to start saving our liberty.

In this way, we take our country back, one state at a time, starting with Texas.